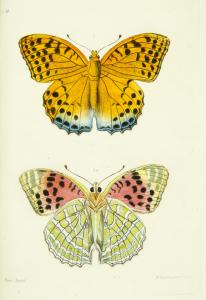 Descriptions and Figures of some new Lepidopterous Insects chiefly from Nepal.

The following figures were selected from General Hardwicke's Collection of Drawings

From the introduction: "The following figures were selected from General Hardwicke's Collection of Drawings. The Engravings were made, the impressions coloured, and the descriptions set up in type in 1833; but the appearance of the work was delayed by the death of General Hardwicke ..." Major-General Thomas Hardwicke (1756-1835) was an English soldier and naturalist who was in India from 1777 to 1823. He collected numerous specimens of natural history and had them painted by Indian artists. From these paintings many new species were described. A scarce work.