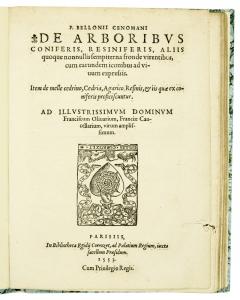 First edition. The first work on coniferous trees and one of the first botanical books to cover a single species. Belon was the first to name all cone-bearing trees 'coniferae' a term which was followed by Gesner. Descriptions are given of the various species, including their locations, and he cites authorities such as Dioscorides. The work contains illustrations of Cedrus major, Picæ arboris figura, Pinus, Icon Pinastri, Laricis figura, Sapini arboris delineatio, Abies foemina, and Cupressus.
Pierre Belon (1517-1564) was one of the most orginal naturalist of the Renaissance. "He was one of the first explorer-naturalists; and between 1546 and 1550 he undertook long voyages through Greece, Asia, Judaea, Egypt, Arabia and other foreign countries... Belon's observations were generally correct. He looked at the world as an analyst devoted to detail. He succeeded in winning the confidence of the great and was famous during his lifetime" (DSB). The woodcuts are excellent. Inner and outer margin with wormhole not affecting the text.

Three issues appeared, the other two with imprint of Cavellat or Benoît Prevost.