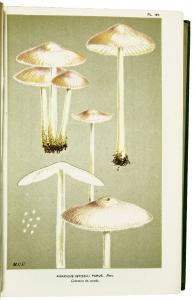 A fine copy of this rare and most comprehensive atlas on British fungi. Cooke (1825-1914), an eminent mycologist, was the founder of the journal 'Grevillea' and was one of the great promotors of mycology in England. 'Cookes's most ambitious work, the "Illustrations of British Fungi", is a monumental work of labor and patient application. I am told that not only did he make the original drawings of the plants, but that the figures were actually transferred by Cooke to the stones from which they were printed' (C.G. Lloyd, Letter no. 57).
The number published of the 'Illustrations of British Fungi' must have been very small as there were only 70 subscribers in Britain when volume 2 was issued.