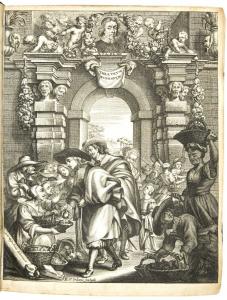 Scarce first edition, a reissue appeared 1712. "First edition of the first separate general work on fungi, describing edible and poisonous varieties. L'Escluse has done a study called 'Fungorum in Pannonis Observatorum Historia' which was first published as part of his 'Rariorum Plantarum Historia', 1601. However, according to Nissen, L'Escluse's original manuscript for this treatise with its eighty-seven original drawings had been lost by the publisher, so they had to use other illustrations for the 1611 edition, and these were quite inaccurate. Afterwards the lost manuscript reappeared and Sterbeeck used it as a basis for his work, adding much new material of his own" (Hunt 341).
"Frans van Sterbeeck, a Flemish priest of noble extraction, was born and died in Antwerp where he lived for the greater part of his life. During the eight years following his ordination in 1655, while suffering from a chronic illness, he returned his attention to botany, with particular reference to fungi and soon became a recognized expert. He was on friendly terms with other Flemish botanists and in May 1663 was visited by John Ray who admired the rare plants in van Sterbeeck's garden. It was in 1672 that Adriaan David, an Antwerp pharmacist and amateur botanist (he contributed a sonnet to the collection of adulatory tributes to the author which prefaces the 'Theatrum fungorum'), took the celebrated 'Code de l'Éscluse' (then owned by Dr. Syen, professor of botany at Leiden University) to van Sterbeeck who made considerable, if somewhat surreptitious, use of it as a source of illustrations for ther 'Theatrum fungorum' in which he claimed to have based all but a few figures on direct observation from nature" (Ainsworth, Introduction to the history of mycology pp 48-49). The manuscript was lost again for a period of 2 hundred years and is now in the Leiden University library.

The elaborate frontispiece shows baskets full of mushrooms and in the middle of a crowd most probably van Sterbeeck picking a mushroom out of a basket.
Very clear and strong impressions of the plates.