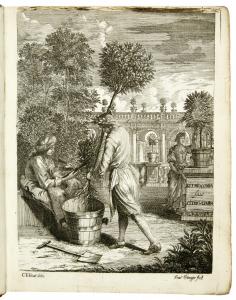 First edition of Sterbeeck's rare treatise on the culture of citrus fruit in the Low Countries. 'Van Sterbeeck was a Jesuit priest... His book about citrus fruit and other exotic plants starts with five congratulatory poems, some in Flemish, some in Latin, all by various local worthies praising their friend for his achievement. The extra leaf between pages 74 and 75 contains another poem, in couplets, called "Weeninge van Adam", a lament for Eden, following a chapter of speculation on the identity of Adam's apple, the forbidden fruit - an apple, a fig, or even a banana? A lengthy bibliography and list of contents follow before the main text, a first part on oranges, a second on citrons and grapefruit, a third on lemons, and a fourth on exotic trees, grafting, and pests. The last section deals with pomegranates, passionflowers, laurels, cinnamon, and the oleander... The part of the book on the management of exotic trees, indoors in winter or out of doors in summers, describes how to keep them happy in tubs or pots, and even how to cope with insects, mice, or rats in greenhouses. The whole book is dedicated to Justus de Nobelaer, Knight, whose palatial greenhouse is described on page 167, where Commelin's is also mentioned' (Sandra Raphael, An Oak Spring Pomona pp. 186-7). It is De Nobelaer's arms which appear on the engraved plate, and he may have borne some of the expense of publication. Raphael also notes that Sterbeeck records in his preface that he lent his notes to his friend Jan Commelin, who made use of them for his 'Nederlantze Hesperides', which appeared in 1676; he mentions this fact in order that the readers don't suspect him of plagiarising the earlier work.

The Oak Spring copy contains a portrait, which is not mentioned in the collations given in Nissen, Stafleu, and Hunt, but was certainly issued in at least some of the copies. The frontispiece was designed by Charles Emmanuel Biset and engraved by Frans Ertinger, who also signed the coat-of-arms plate. Sterbeeck (1630-93) was an Antwerp-born priest and botanist; he also wrote the earliest work solely devoted to fungi, 'Theatrum fungorum', 1675. Frontispiece with tiny old marginal paper repair not touching the illustration.