First and only edition. During the 1850s the Tokugawa government decided to strengthen its nationaldefense and invited naval officers and technicians to Nagasaki. One of them was J. Pompe van Meerdervoort, a naval surgeon from the Netherlands. He was asked by the Japanese authorities to establish a new system of medical education in Nagasaki. Assisted by Matsumoto Ryôjun and Shiba Ryôkai he established a western style hospital with 124 beds and a medical school. When Pompe left Japan England, France and the USA were already strengthening their pressure on Japan to open up the country, and the Dutch influence, that had continued for 250 years, gradually began to decline. Nevertheless Pompes achievements and the outstanding role he played in the modernization of Japanese medicine are highly esteemed in Japan. Later in 1865 the school's name was changed to Seitoku-Kan and after the Meiji-Restauration, it became the origin of the Medical School of Nagasaki University. Pompe's memoirs "Five years in Japan" describe the changing international situation in East Asia together with his medical activities and many observations on the Japanese society at his time. Pompe also experimented with photography, collaborating with some pupils he had taken over from his predecessor, Dr. J.K. van den Broek. Van den Broek was the first to introduce photography in Japan during the years he practised there (1853-1857). Under his tuition, a Japanese doctor, Keisai, was learning to take photographs using the daguerreotype process invented in 1839. Among Pompe's students was the first professional photographer in Japan, Ueno Hikoma. He opened a photographic studio in Nagasaki in 1862. Another of Pompe's students, Uchida Kyuichi, became famous as the first photographer ever to photograph the Emperor and Empress. Most plates show Japanese people in costumes, the frontispiece in vol. 1 shows the bay of Nagasaki and the frontispiece in vol. 2 shows the medical hospital at Nagasaki. Provenance: Bookplate of C.C. Krieger. Cordier 588; Tiele 873; Landwehr, 'Dutch Books with coloured plates', 395. 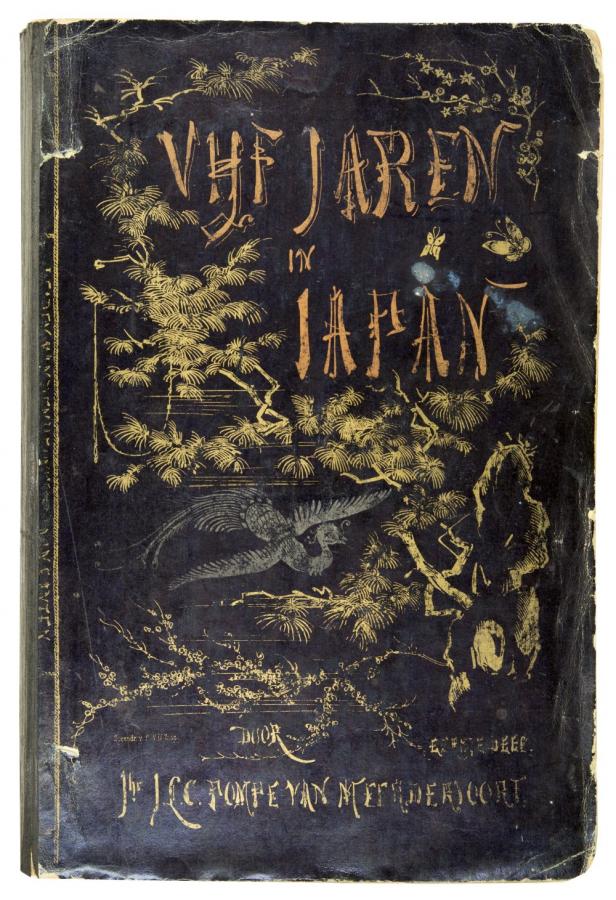