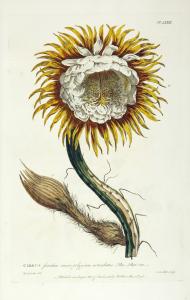 Figures of the most beautiful, useful, and uncommon Plants described in the Gardeners Dictionary ... With the characters of their flowers and seed-vessels, drawn when they were in their greatest perfection. To which are added, their descriptions, and an account of the classes to which they belong, according to Ray's, Tournefort's, and Linnaeus's method of classing them.

Philip Miller, called by Linnaeus 'the greatest gardener of his time', was director of the Chelsea Gardens

A fine copy of the first edition. Philip Miller, called by Linnaeus 'the greatest gardener of his time', was director of the Chelsea Gardens. The Chelsea garden was for many decades the great centre of plant introduction and distribution in the British Isles, especially during Miller's long reign (1722-1770).
The beautiful plates of this splendid and monumental work were all engraved after drawings by Ehret, Lancake, John Miller, a.o. "In the execution of the work no expense has been spared to render it as perfect as possible. The drawings were taken from living plants, the engravings were most of them done under the author's inspection and the plates have been carefully coloured from the original drawings" (from the preface). According to W.T. Stearn Miller's 'Gardeners Dictionary' is the most important horticultural work of the eighteenth century. "Miller stressed the importance of accuracy in illustration; each plant had to be drawn from nature at its best stage of flowering, with the fruit and seeds to be added later on ripening... Miller provided a wealth of elegant ornamental plants in the 'Figures' for those appreciating beauty in botany and included many others on account of their usefulness or rarity. They remain botanically important because some were cited by Linnaeus and other botanists and because they graphically record plants in cultivation at that time" (Hazel le Rougetel, The Chelsea Gardener Philip Miller 1691-1771 pp. 110 & 114). Richard Pulteny, the British naturalist and historian of science wrote the following: "... England had not before produced any work, except the 'Hortus Elthamensis' or Catesby's 'Carolina', so superb and extensive...".

Provenance: With the amorial bookplate of James Walwyn, Longworth, Herefordshire and bookplate of Pull Court Library.