A fine copy of the first edition. This is one of the greatest natural history books of all times, and the most finely illustrated and lavish record of an eighteenth-century natural history cabinet. The stunning plates depict exotic plants, animals, insects, minerals, fossils, and shells, along with some monstrosities. The shell plates are particularly impressive, with 60 plates depicting several thousand shells arranged in decorative patterns. "the plates make Seba's work one of the more important of its time, also for the purposes of zoological nomenclature, as Linnaeus and many subsequent authors based new species upon figures from Seba's work" (Holthuis). Volume I contains for the greater part mammals, birds and amphibians. Vol. II reptiles, especially snakes are best represented. Vol. III contains fishes, mollusca, echinodermata, crustacea, coelenterates, vermes, bryozoa, sponges and algae. Vol. IV insects, minerals and fossils. 'The text on the fishes in volume III was mainly written by Petrus Artedi (1705-1735), a young Swedish zoologist and friend of Linnaeus, who in 1734 went to England and Holland, and worked for Seba; he drowned in an Amsterdam canal in 1735; his publications on ichthyology are so fundamental that he is called the 'Father of Ichthyology'' (Holthuis). Albertus Seba (1665-1736), the son of a Frisian peasant, became an apothecary in Amsterdam and amassed a considerable fortune in the service of the Dutch East India Company. His wealth and contacts enabled him to accumulate an internationally renowned collection of natural wonders, and his private museum was one of the 'sights' of Amsterdam and was visited by both nobility and naturalists. In 1717 he sold his collection to Peter the Great for the then enormous sum of 15000 guilders, but embarked immediately upon forming a second collection, even grander than the first. It is this second collection which is commemorated in the present work, published over thirty years with no expense spared in its production. Seba himself died in 1736, after the first two volumes had appeared. His collection was auctioned in 1752 in order to provide funds to complete the publication. The drawings of plants are now in the State Herbarium at Leiden. A collection of fossils and minerals, known as the Seba collection, is in the Palaeontological Museum in Copenhagen. It was purchased at the 1752 auction by Count Moltke. Seba was assisted in the preparation of the text by such eminent naturalists as Boerhave, Artedi, Gaubius, Musschenbroek, et al. Aernout Vosmaer (1720-1799) was the editor of the last two volumes, assisted by Pallas and Houttuyn. Vosmaer was Director of the menageries of the 'Natuur- en Kunstcabinetten' of the Stadtholder Willliam V. The French translation was made by Dr. Duclous in collaboration with Allamand. The frontispiece, an allegory of the personified continents offering up their natural treasures, is engraved by Pieter Tanjé after L.F. Dubourg, the portrait of Seba is engraved by J. Houbraken after J.M. Quinkard, and the five head-pieces are also by Tanjé. The plates are by Tanjé and other artists and engravers, for whom see Nissen. Seba's original copper plates were used to produce a new edition of his illustrations, entitled 'Planches du cabinet de Seba' (F.G. Levrault, Strasbourg and Paris, 1827-1831), under the supervision of George Cuvier and the general editorship of Félix Edouard Guérin-Méneville. The work was issued in an uncoloured state, but purchasers could then have them hand coloured; one of these colorists has been identified as J. Fortuÿn, he executed the copy for the Stadtholder William V, Prince of Orange, now in the Royal Library and signed his name on the first plate of volume one only. The present large copy is in mint condition, without any foxing etc. Collation: Tomus I (1734): Half title page (in French) + title page (in Latin) + engraved frontispiece (entitled ?Industria?) + dedication by Seba (2 pages) + foreword by Herman Boerhaave, professor of medicine at Leiden (2 pages) + Latin preface by Seba (6 pages) + French preface by Seba (5 pages) + poem by H. D. Gaub, professor of medicine at Leiden (3 pages) + poem by Jan A. van Orsoy of Amsterdam, Seba?s fellow collector of naturalia (2 pages) + index to text and plates (9 pages) + engraved portrait of Seba, featuring his collection of snakes + 1?178 pages + plates I?CXI (111 engraved plates, of which 59 are double-page). Tomus II (1735): Half title page + title page + tribute to Seba by Johann Jacob Baier, president of the Leopoldina Academy of Sciences (2 pages) + poetic tribute to Seba by Ferdinand Jacob Baier, physician-naturalist and son of J. J. Baier (2 pages) + Latin preface by Seba (8 pages) + French preface by Seba (8 pages) + index to text and plates (10 pages) + 1?154 pages + plates I?CXIV (114 engraved plates, 40 double-page). Tomus III (?1758? [1759; see Dates]): Half title page + title page + Latin preface (2 pages) + French preface (2 pages) + index to plates (17 pages) + printer?s page + 1?212 pages + 108a?108d pages + plates I?CXVI (116 engraved plates, 61 double-page; plate 19 labelled ?XVIV?). Tomus IV (1765): Half title page + title page + I?VIII (Latin and French prefaces) + 9?42 (index to plates and editor?s note) + 1?226 pages + plates I?CVIII (108 engraved plates, 14 double-page). The index to the entire series is on pages 129?226 of volume 4. The grand total of engraved plates is 449, 174 of them double-page. Nissen BBI, 1825; Nissen ZBI, 3793; Landwehr 178, 179; Fine Bird Books p. 106; L.B. Holthuis. Albertus Seba's "Locupletissimi Rerum Naturalium Thesauri..." (Zool. Meded. Vol. 43 no. 19, juli 1969). 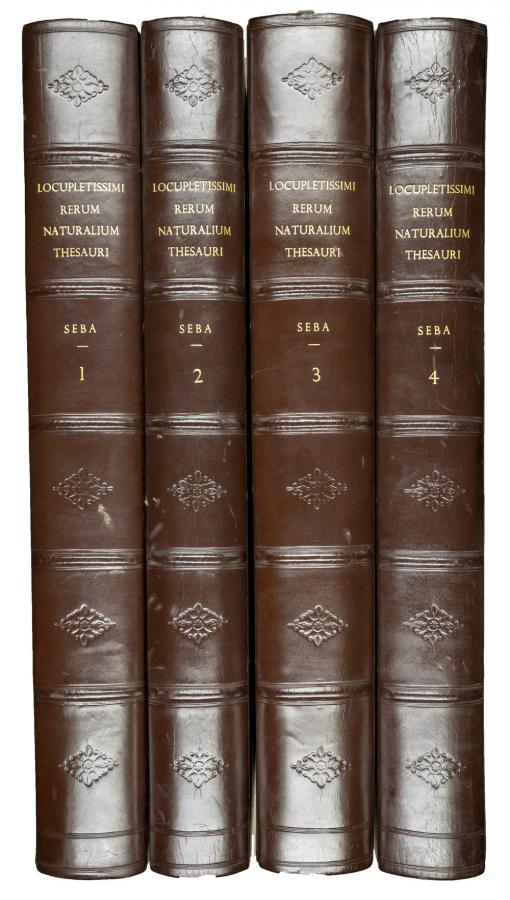