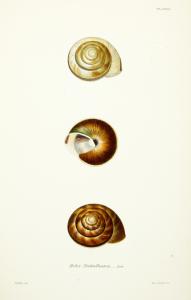 Terrestrial Air-Breathing Mollusks of the United States and the adjacent territories of North America: described and illustrated by Amos Binney. Edited by August A. Gould.

First volume with bookplate of Amos Binney. 5th volume with letter of W.G. Binney to the Librarian of Harvard. A very rare complete set with the supplements. "Amos Binney (1803-1847) and William G. Binney (1825-1909) are two scientists who played significant roles in 19th century conchology. Amos was an avid collector of rocks, birds? eggs, and shells and was a founding member of the Boston Natural History Society. He is most notable for his work in malacology (study of the Mollusca animals, not just the shells) of land mollusks. His monumental publication 'The Terrestrial Air-Breathing Mollusks of the United States' (1851-1878) was published after his death. His son William followed in his father?s footsteps and continued to collect and document shells in the U.S. He edited the Complete Writings of Thomas Say (1858) and his father?s 'Terrestrial Air-Breathing Mollusks of the United States' (J. Harster 'The Conchologists'). All volumes with former owner stamp on titles.