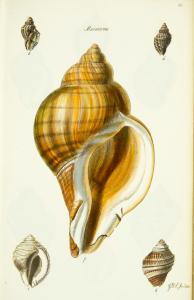 The Conchological Illustrations [or coloured figures of all the hitherto unfigured shells].

G.B. Sowerby (2nd) was the most gifted draughtsman of shells of the Sowerby family

A rare conchological work, which was published in 200 parts each with one plate. Many of the illustrations are based on the Cuming's specimens. "He was only twenty years old when, with his father's assistance, he brought out the first number of 'The Conchological Illustrations'. When it was completed, nine years later, this valuable work contained 200 steel engraved plates ..." (Dance. Hist. of Shell Collecting p. 116). "The 1,500 figures contained in the work, represent 1,000 new species and varieties of 21 different Genera, and include all the species of Cypraea, Chilina, Neritina, Margarita, Eulima, and Typhis" (From the Introduction). G.B. Sowerby (2nd) was the most gifted draughtsman of shells of the Sowerby family. As the work was issued in parts some text pages vary in size. Former owner's stamp on title.